From  http://www.joemygod.blogspot.com/, Joe My God

Workers arrived at the Santa Ana office of Equality California to find a small string noose hanging from the door. Local police were uninterested. EQCA employee Mel Distel relates her exchange with the cop who responded to her call: 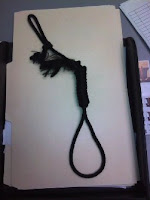 "There was nothing they could do, of course, there was no suspect and no crime had been committed. The officer said 'what it is, is a string on a door.' My vision got blurry, I was embarrased and felt stupid for making the call. I took a deep breath and said 'Do you see any correlation between the fact that this is a gay office and there was a noose left on our door in the wake of all of these teen suicides?' The officer said, 'Sometimes you just have to live with being a victim,' and proceeded to mention that his car had been broken into before." That didn't exactly sit well with Distel. "As if that's the same. As if having your stereo stolen is anything like the message 'You should kill yourself.' As if random theft is anything like an act meant to convey hate and stir up fear in the heart of a minority group."

Making threats of violence against an LGBT group is considered a hate crime in California, despite the officer's indifference.
Labels: California, Equality California, LGBT rights
Posted by BJ Jackson Lincoln at 1:21 PM No comments:

I Can't Find My Phone

Thank you Joe at http://www.joemygod.blogspot.com/ for this gem. The service is free.

http://www.icantfindmyphone.com/
Posted by BJ Jackson Lincoln at 7:57 AM No comments:

John Corvino is one of my favorite writers and contributes to 365gay.com regularly. Enjoy.

Corvino: What do we do with Evangelicals who 'want to help'?

Posted by BJ Jackson Lincoln at 6:25 AM No comments: