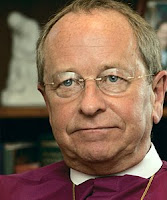 Saying he is tired of the incessant death threats rained down from God's Gentle People™ , openly gay Episcopal Bishop Gene Robinson is retiring.

"The fact is, the last seven years have taken their toll on me, my family and you," Robinson wrote in a message posted on the diocese website. "Death threats, and the now-worldwide controversy surrounding your election of me as bishop have been a constant strain, not just on me, but on my beloved husband, Mark, who has faithfully stood with me every minute of the last seven years." Robinson was openly gay when he was elected bishop in 2003, but it aroused such passions that he wore a bullet-proof vest to his consecration. His ordination as bishop -- the first of an openly gay priest in any Christian denomination -- so divided the church that its General Convention in 2006 called a moratorium on "any candidate to the episcopate whose manner of life presents a challenge to the wider church."

How sad is this.
Posted by BJ Jackson Lincoln at 12:11 PM