Crosspost from Edge On The Net 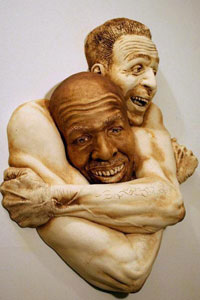 Gay Artist = Gay Art?Another flap over free speech erupted from the opposite end of the political spectrum, when the public library in Tillsonburg, Ontario installed four works by a gay sculptor, only for the exhibition case to then be draped with a cloth following charges from a local resident that at least one of the pieces represented homosexual eroticism.

The sculptor, R. Bruce Flowers, said that there is "nothing offensive or pornographic about" his work, and argued that his sculptures were being "eroticized" and censored simply because they are the work of "a gay man who sculpts positive images of his community," a Dec. 15 article at local newspaper the Tillsonburg News reported.

"What’s going in Tillsonburg is kind of upsetting," Flowers told the newspaper, adding, "This censorship is deeply distressing because of the negative message it sends out to the homosexual community. With this kind of hostility in their own community, what chance do young people have of making their transition into a homosexual lifestyle valid?"

The most controversial of the Flowers pieces, titled "Joy," depicts one man throwing his arms around another as both smile broadly. The playful piece was unfairly "eroticized," according to Flowers. But the artist added that the fact that the piece has been censored feds into the conversation that art enables in the culture at large. "We’re not moving this exhibit," the artist told the media. "I think it would be a far more powerful statement to leave the cloth there if that’s what they think."

Perhaps to that end, a sign attached to the cloth invited library patrons to "Feel free to view the display of sculpture (by artist R. Bruce Flowers) behind the curtain."

The article speculated that public opposition was largely based on--if not confined to--a Dec. 9 letter to the editor that the Tillsonburg News had previously published, in which a man named Greg Friesen complained about the library showcasing depictions of "homosexual intimacy."

The letter drew responses in the editorial pages such as that from Fr. Matthew George of St. Mary’s Parish, who rebutted Friesen’s claims by writing, "I’m guessing that the piece that elicits this strange response is the one called Joy. How doubly sad that something which to me seems to capture a moment of simple joy and shared humanity has been condemned as somehow advancing the homosexual agenda and not worthy of display in our library."

The library’s board convened a meeting on the controversy, at which gay resident Dennis Cutts spoke out against the sculpture’s veiling. "Personally I feel this decision by the library tells me I shouldn’t feel as though I’m part of this community as a gay person," Cutts told the board. "I feel this is bullying. It makes me feel afraid and uncomfortable."

Flowers attributed opposition to his sculptures, which he deemed "extremely family-friendly," to a local newspaper article that mentioned his sexuality, a Dec. 22 Xtra! article said. "The local Baptist church took great offense to the work as soon as they found out I was a gay sculptor," Flowers told the media. "It seemed to have contaminated the work. Suddenly it was all negatively eroticized."

Added Flowers, "What was really frightening about this whole thing is, it’s not like they came and studied the work, analyzed it, and then were offended by it.... It’s just because I’m a gay sculptor."

At that point, the local GLBT community rallied to Flowers’ defense. "But so many in the queer community in this area couldn’t speak up because they’re closeted," Flowers noted. "It’s created this enormous dialogue in the community. It’s really all just homophobic censorship coming out of this New Hope Baptist Church."

The church’s pastor, John Friesen-father of Greg-told Xtra!, "People in the community I talk to, they are not pleased either." Added the pastor, "It’s not portraying family values. Do you see a man and a woman and children?"

Xtra! reported that at a Dec. 14 meeting attended by the mayor, the library board voted unanimously to keep the four Flowers pieces on display until the end of February, 2011--sans veil
Posted by BJ Jackson Lincoln at 6:47 PM