The 33rd annual Kennedy Center Awards were aired Tuesday night with awards going to Merle Haggard, Paul McCartney, Oprah Winfrey, Bill T. Jones, and Jerry Herman. All are talented performers and have given the world so much.
During the tribute to Jerry Herman, who gave us Mame, Hello Dolly, and La Cage Aux Folles, was a grand finale which included the DC Gay Mens Choir.
Only 100 of the 250 plus fabulous men in this group were chosen to perform and they included our friend Morgan Slusher. Dr. Slusher is a professor at the Community College of Baltimore County where my wife, Tami, attends and is the faculty advisor for the Rainbow Club which Tami is the president.
(Morgan is the handsome guy on the far left) 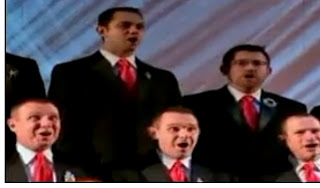 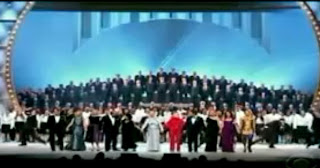 Posted by BJ Jackson Lincoln at 5:04 AM