Read this first then scroll down for my commentary. 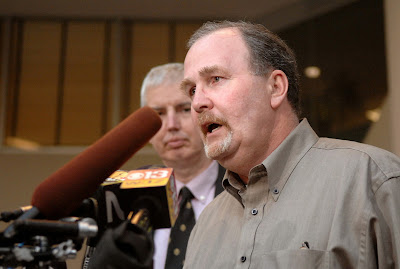 Bereaved father Albert Snyder, who lost his Supreme Court battle with Westboro Baptist Church earlier this week, says that somebody is inevitably going to open fire on the Phelps family.


"Something is going to happen," Albert Snyder told CNN Thursday. "Somebody is going to get hurt." "You have too many soldiers and Marines coming back with post-traumatic stress syndrome, and they (the Westboro protesters) are going to go to the wrong funeral and the guns are going to go off." "And when it does," Snyder said. "I just hope it doesn't hit the mother that's burying her child or the little girl that's burying her father or mother. It's inevitable." Albert Snyder again slammed the high court justices for not having "the common sense that God gave a goat." "I just can't believe that there was no common sense used in this decision," Snyder said.

Snyder must now pay $116K in court costs to the Phelps.

There are a few things you need to know.
First is that Albert Snyder is getting help from the right and left because for once we agree that Westboro should keep their mouth shut. He will not have to pay anything out of pocket thank goodness.
The left sees them for the hate mongers they are. The right sees them as competition  and does not want them stepping on their toes.


Second, The SC ruled correctly. WBC did not break any laws and they do have the freedom to say what they like no matter if we do or not. The point was made that they did not break any laws. All of America needs to make local and state laws prohibiting any protests within so many yards of any funeral or school. They are in Maryland now protesting at a high school.


Next, I am not in favor of shooting them. Not that I haven't thought it would be nice at times. If any of them were to be killed it would fuel their fire and create a martyr. I am sure many others have thought the same thing but Albert put it out there in the open. It was brave and very stupid because he all but called on the mentally ill to take care of it.


Lastly, WBC is the best example of our Freedom of Speech. The right keeps saying that gay marriage will hurt religious freedom. Some have said that passing an Equal Employment Non-Discrimination Act will hinder their freedom to stand on the street and say what they like or what is said in a place of worship.
Gay marriage will hurt NOTHING  and your freedom to preach and say hateful things is safe.
Posted by BJ Jackson Lincoln at 7:19 PM