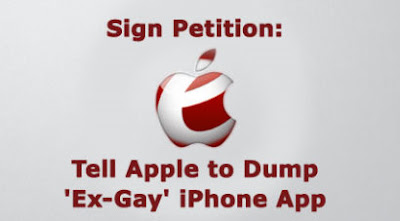 Truth Wins Out, the organization that fights the "ex-gay" movement, has launched a petition calling on Apple to remove Exodus International's new iPhone app.


This new iPhone app is the latest move in Exodus’ dangerous new strategy of targeting youth. In light of the recent wave of LGBT youth suicides, this tactic is particularly galling as it creates, legitimizes, and fuels the ostracism of LGBT youth by their families. According to a study published in the Journal of the American Academy of Pediatrics, LGBT teens who experienced negative feedback from their family were 8 times more likely to have attempted suicide, 6 times as vulnerable to severe depression, and 3 times more likely to use drugs (Caitlin Ryan, San Francisco State University, June 2009). Apple doesn’t allow racist or anti-Semitic apps in its app store, yet it gives the green light to an app targeting vulnerable LGBT youth with the message that their sexual orientation is a “sin that will make your heart sick” and a “counterfeit.” This is a double standard that has the potential for devastating consequences. Apple needs to be told, loud and clear, that this is unacceptable. Stand with Truth Wins Out — demand that the iTunes store stop supporting homophobia and remove the Exodus app.

Posted by BJ Jackson Lincoln at 9:10 AM