A cheque was accompanied by a hand written note that read: “I am sending you this money because I don’t think it’s fair that Gay people are not treated equally.” 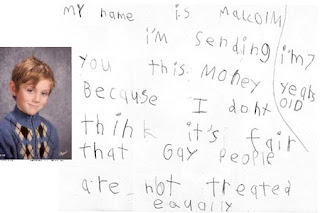 A note from the boy’s mother said: “To teach the importance of improving the world around him, Malcolm was given $140 to give away to the charity of his choice.
After hearing a story on the radio about the mistreatment of gays and lesbians,
Malcolm became both upset and curious about the issue…to help, he chose to split his money between the L.A. Gay & Lesbian Center and the Human Rights Campaign Foundation.”

Posted by BJ Jackson Lincoln at 9:40 AM