Quote Of The Day - Maggie Gallagher

This drivel comes from a blob who does not use her husbands name or wears a ring half the time. She is on the road saving  marriage from da gay most of the time so she is not with her husband much. ( I think she is a big old lesbian hiding in a frumpy housewife.)

Crosspost from JoeMyGod.com
Learn more about this and related topics by clicking on any link below thanks to Joe. 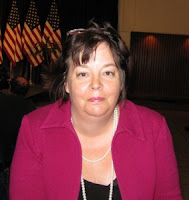 "To me, it’s amazing, given the array of forces pushing for gay marriage and the weak response of most conservative politicians, that the American people have stubbornly dug in their heels on this question: Are two men in a union a marriage? The answer is 'no,' and people really do know it. Marriage is the union of husband and wife — for a reason. Creating a world where people are treated like haters or bigots for standing for marriage is irrational, and people know that, too. An America in which Genesis is akin to racism is an America that will be unrecognizable. Ideas have consequences, and this idea cuts us off from our roots and makes the future much harder."- Maggie Gallagher, who adds that thanks to Maryland's referendum process, NOM is "going to win there, one way or another."
Labels: bigotry, Maggie Gallagher, marriage equality, Maryland, NOM, Quote Of The Day, religion
Posted by BJ Jackson Lincoln at 1:58 PM