Eugene Delguadio: Homosexual Predators Are Running Wild In The Halls Of CPAC

I think this guy wishes he was a drunk underage conservative. Being drunk would be a good excuse to.......you know. 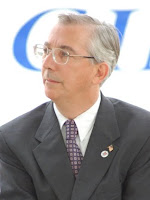 Yesterday "Public Advocate For The Unites States" Eugene Delguadio warned us about all those radical homosexual pirates running amok on the streets of Tampa. Today he writes with the breathless news that gay predators are lurking the halls of CPAC, seeking to take advantage of drunk underage conservatives.

For years, the Conservative Political Action Conference (CPAC) was the scene of exciting speakers throughout the day. But at night there have always been dozens of alcohol parties. These parties are viewed as festive opportunities to meet conservatives from all over the country in a more social atmosphere. It was not unusual for me to have to escort adult predators, even some openly homosexual men out of these parties because they could not resist the urge to prey upon the younger teenage victims at their disposal in a vulnerable place a long distance from their home and without their parents’ presence.

These days the predator homosexuals use political cover to gain access to their intoxicated victims. As I’ve told you before, the Conservative Political Action Conference has been infiltrated by the Homosexual Lobby. Radical Homosexual front groups like “GOProud” will be in attendance to push their perversion on young conservatives. This sort of predator behavior was illegal and immoral back when I had to clean house and condemn them. And it is still illegal and immoral to create an atmosphere in which those same misdeeds could occur again. Parents should be warned and frankly the authorities at CPAC should be told that there are minor age students who need to be looked after and protected.

Eugene closes today by noting that if you will only send him a "prayerful contribution" of "$10, $25, $50 or even $100," he can continue his noble work of stopping predatory homosexuals.
Posted by BJ Jackson Lincoln at 5:14 PM