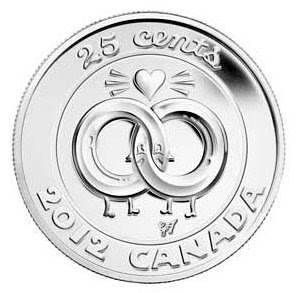 They're meant to be keepsakes rather than legal tender, but how cool is this? Artist Gary Taxali talks about his collaboration with the Royal Canadian Mint:

The coin that Taxali is most proud of is the wedding-themed coin, featuring two intertwining rings that represent a gender-neutral marriage. “I live in a country where gender is irrelevant and the coin has to represent that,” says Taxali. “I thought it would be a nice thing to represent that and to show two rings; is one a man and one a woman? Two men? Two women? It doesn’t matter what they are, they represent the union of two people. “The Royal Mint really liked that idea because it represents the spirit of our nation and also, I think that it’s empowering to somebody and hopefully this calling will send a powerful message that we’re all the same and a wedding is a wedding. I think this is probably the first piece of currency in the world, paid by a federal government that is pro-wedding regardless of gender and that makes me really happy.”

Even though the launch was just last week, the Royal Mint is already sold out of the first run. But they are taking future orders for the "wedding gift set" of coins. I predict these will be huge.
Posted by BJ Jackson Lincoln at 6:32 AM