We now know where the money is coming from but no numbers yet.  This will be costly and long. What a huge waste of time, effort, and funds. I can't believe this is from my home state but then you can see why I got the hell out. 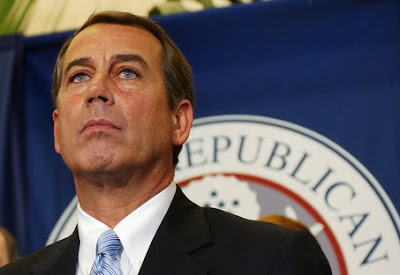 Remember Nancy Pelosi's letter to John Boehner in which she demanded to know how he was going to pay for the GOP's defense of DOMA? Here's how:

House Speaker John Boehner said he intends to divert funding from the Justice Department to the U.S. House so Congress can defend the federal law that bars recognition of same-sex marriage. The Ohio Republican disclosed this in a letter to House Minority Leader Nancy Pelosi, D-Calif., who is strongly opposed to Congress going to court to defend the 1996 law. An estimate on court costs was not given. [snip] Boehner asked the Bipartisan Legal Advisory Group -- consisting of the top leaders of Congress -- to defend the law in court. The GOP members of the group sided with Boehner. "By the president's action through the attorney general we have no choice," Boehner's letter says. "The House now faces that additional burden and cost." Boehner said he has directed the House's counsel and the House Administration Committee to ensure that there are "sufficient resources" and expertise, including an outside lawyer if necessary, to defend the law.

According to the Human Rights Campaign, Boehner has retained former Dubya Solicitor General Paul Clement to defend the cases now in the courts. Clement is now with the private firm King & Spaulding. Via HRC's press release:

“Not only are House Republican leaders defending the indefensible, they’ve brought in a high priced attorney to deny federal recognition to loving, married couples,” said HRC President Joe Solmonese. “Speaker Boehner appears ready to go to great lengths, and the great expense of a high-power law firm, to try to score some cheap political points on the backs of same-sex couples. King & Spaulding were not required to take up this defense and should be ashamed of associating themselves with an effort to deny rights to their fellow citizens.”

UPDATE: A tipster points out that King & Spaulding has a 95% rating from the Human Rights Campaign, something the law firm trumpets on its own website.

King & Spalding is committed to having the brightest and most diverse lawyers it can find, including members of the Lesbian, Gay, Bisexual, and Transgender (LGBT) community. We work hard to foster and maintain an environment where our lawyers can provide the highest level of legal service while being true to themselves in the process. The firm's non-discrimination policy prohibits discrimination based on sexual orientation and gender identity. Further, domestic partner benefits are offered for same-sex couples.

Does that sound like a company that really wants to get involved in the GOP's anti-gay bigotry?
Posted by BJ Jackson Lincoln at 5:33 PM