Lawmaker Flip Flops on Gay Marriage While Stealing Public Funds to Pay for Her Own Wedding! 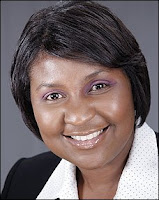 This is some messed up stuff. Ever since I moved to Baltimore there has been a Mayor and many others charged with pilfering funds for personal gain but this one takes the cake!

Alston was little known out side of her Prince George’s district until this spring. She co-sponsored a bill to legalize same-sex marriage but then left a hearing room with another lawmaker just before the bill came up for a vote. The two lawmakers later returned, but the disappearance delayed the committee vote and amounted to the first of many setbacks that ultimately derailed the legislation.
She is being charged with writing herself checks and cashing them to pay for at least $3,560 in expenses for her wedding day. According to the Office of the Maryland State Prosecutor, she also wrote herself checks to help pay the salary of an employee in her law firm.
Some said it was ironic that so close to the celebration of her own nuptials a lawmaker reversed course and opposed letting gays marry in Maryland.

From joemygod.com.....RELATED: Alston is one of the black legislators championed by NOM as evidence how the African-American community opposes LGBT rights.
Posted by BJ Jackson Lincoln at 5:36 AM