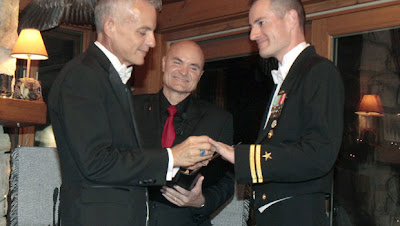 Moments after the clock struck the official end to DADT, last night an active duty Navy officer married his husband in Vermont.


When Navy Lt. Gary Ross and his partner were searching for a place to get married, they settled on a site in Vermont, in part because the state is in the Eastern time zone. That way, the two men were able to recite their vows before family and friends at the first possible moment after the formal repeal of the military's "don't ask, don't tell" policy. Just after midnight Tuesday, the partners of 11 years were married. "I think it was a beautiful ceremony. The emotions really hit me, but it's finally official," Ross said early Tuesday. Ross, 33, and Dan Swezy, a 49-year-old civilian, traveled from their home in Tucson, Ariz., so they could get married in Vermont, the first state to allow gays to enter into civil unions and one of six that have legalized same-sex marriage.

Thanks to DOMA, Ross' new husband is still not entitled to health care or to most of the benefits extended to the heterosexual spouses of service members.
Posted by BJ Jackson Lincoln at 6:52 AM