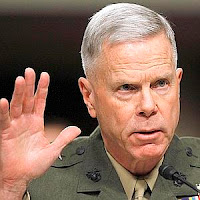 From joemygod.com comes this GREAT news.

USMC Commandant James Amos once argued fiercely against the repeal of DADT. But now he says things are going well.


The apparent absence of angst about gays serving openly in the Marines seemed to confirm Amos’ view that the change has been taken in stride, without hurting the war effort. In the AP interview, he offered an anecdote to make his point. He said that at the annual ball in Washington earlier this month celebrating the birth of the Marine Corps, a female Marine approached Amos’s wife, Bonnie, and introduced herself and her lesbian partner. “Bonnie just looked at them and said, ‘Happy birthday ball. This is great. Nice to meet you,’” Amos said. “That is happening throughout the Marine Corps."

Some say that Amos is Flip Flopping in the issue. I think he he believed at the time it was a bad idea based on his view from the over 45 crowd. He did what a good soldier would do and made sure the repeal of DADT did not cause a problem in the ranks. When he saw that all was well he believed things would work out. No problem.
No matter what he believes, there has been NO reported problems since the repeal of DADT on Sept. 20, 2011.
The LGBT population knew it would not be an issue and if there was a problem, it would come from Str8 soldiers.
For most of the under 45 crowd it was and is a non-issue.
Thank you to all our brave troops for showing the rest of the country that you all can face any problem including those icky queers. LOL
I hope that the rest of the country takes their example and can work together in peace with the LGBT population as well.

Posted by BJ Jackson Lincoln at 6:20 AM