The Republicans just made into law  excuses for bullying.
Adding "Cause God said so" is NOT an excuse for bullying!
SHAME ON YOU !!! 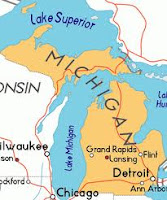 Michigan's state Senate has passed an anti-bullying law which contains a GOP mandated exemption for bullying which has a "religious or moral basis." And that has infuriated the father of the dead child for whom the bill is named.

"Matt's Safe School Law" passed 26-11 with all Democrats voting against it. The bill is named for Matt Eppling, an East Lansing 14-year-old who committed suicide after being bullied by classmates in 2002. The law includes a section noting it doesn't abridge First Amendment free speech rights or prohibit expression of religious or moral viewpoints — a provision Democrats fear could be used to justify harassment of gay, lesbian or transgender students. "I am ashamed that this could be Michigan's bill on anti-bullying when in fact it is a 'bullying is OK in Michigan law,'" Kevin Eppling, Matt's father, whose letter was read by Sen. Glenn Anderson during Wednesday's session.

VIDEO: Towleroad tips us to the outraged response by one Michigan Democrat. "You have explicitly outlined how to get away with bullying!" WATCH THIS.