Quote Of The Day - Ken Blackwell 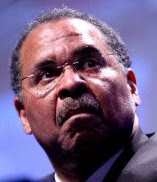 From joemygod.com comes another wonderful example of of the folks back home in Ohio. Keep in mind that Ken Mehlman "came out" after he spent all his efforts to ban or repeal anything that supported the LGBT population acroos the country.

"The Obama administration is lending support to Congress in an effort to repeal the Defense of Marriage Act. The president, instead, is backing something called the 'Respect Marriage Act.' The latter measure, quite simply, would abolish marriage. While calling for 'respect' in the Orwellian sense, it would offer true marriage the same 'respect' President Obama showed to the body of Osama bin Laden-a hasty burial at sea after summarily being put to death." - Family Research Council senior asshat Ken Blackwell, writing for World Magazine.

According to Blackwell, the repeal of DOMA will absolutely lead to the legalization of polygamy. We know this because one time, three years ago, some law professor you've never of said that.

RELATED: Blackwell is the former mayor of Cincinnati and the former Ohio Secretary of State. In 2004 he led the successful effort to ban same-sex marriage in Ohio, an amendment championed by George W. Bush's campaign manager, Ken Mehlman. In 2006 he was the failed GOP candidate for Ohio governor. He is reportedly considering running for the U.S. Senate in 2012.