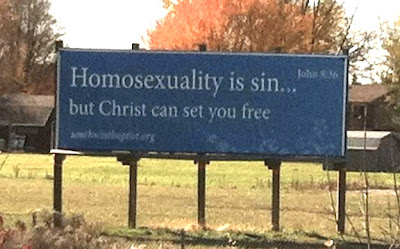 From joemygod.com. .......JMG reader Trent tips us to the above Ohio sign and his petition to have it removed.

This is the mindset of the kind folks in Ohio.
Ya Know......Ohio is known for so many great things from all the firsts in space were Ohio natives to Johnny Appleseed. Home to some Quakers and many Amish, some of who are friends of mine.
Ohio University has a football team worth following and the Football Hall of Fame is in my hometown of Canton. Because of the coal industry, Ohio is the leader in factory pollution control and land reclamation after mining.
We are also the gate way to the underground railroad. Ohio is where the great and brave Harriet Tubman  crossed the Ohio River to freedom with an untold amount of slaves.

One would think that such a diverse state would also be more tolerant of each other.
They are not!
My recent trip back home opened my eyes to the intolerance.
People self segregate and are suspicious of anyone that looks different. They don't make eye contact or smile much.
After living in Baltimore 3 years and seeing/getting lost in every section of town, I have to say that I have never been treated rudely and only once have we had ANY kind of negative remark or look.
19 out of 20 people smile back when you pass them on the street.

Having spent many hours working outdoors in Canton, I have had an opportunity to watch people as much as they watch me. I have spent years work with and among my fellow Cantonians and it is a small community that divides and defines it's self by class and NONE OF THEM LIKE GAYS.

The sign above is a more visible example of how most people there feel.
John Bonehead is the most verbal.

My home and person had been verbally and physically abused to the point I could not spend time one my own porch. There was no stickers on my car that could not be removed quickly or for work. I could not fly a flag.
Not all people are that bad. We have many wonderful friends, many in the art community, and my family is welcoming. But beyond that, I would have to say that it is not the norm.

This sign is but the tip of the iceberg and why, while I miss my friends and family, I do NOT wish to return.