Update on Lesbian King and Queen

From joemygod.com comes this update on the lesbian couple that became King and Queen. It is sad that some people seem to have to judge others. The student body picked this couple and they are all happy about it.
These kids will take us into a time of inclusion and understanding and leave the discrimination and hate behind. I am so proud of the school and the students for standing up for the right things.
Are they cute or what! 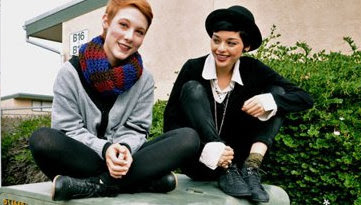 The San Diego-area high school which named a lesbian couple as their homecoming king and queen has been deluged with threats and hate mail since the story made international news over the weekend.


On Monday, Superintendent Bill Kowba interrupted a news conference on the district's financial troubles to comment on an issue he called just as significant as the budget. “What is essentially disappointing is that adults who have contacted the school, many not even San Diego residents, are demonstrating such a lack of tolerance and such a negative role model for children with their hateful comments,” Kowba said. Kowba calls the adults behind the threats "bullies." He also says if the calls and emails came from students, they would have faced disciplinary action.

Here's a few examples from God's Gentle People at Free Republic:
-"Stupid, brainwashed, delusional girls. They are signing up for a life of pain, misery, heartbreak and sin."
-"This is disgusting. It’s deviancy on display, and our kids have been trained to approve."
-"The Principal should be brought up on charges and be made to register as a sex offender."
-"Children who attend godless socialist schools will learn to think and reason godlessly!"
-"The faggot indoctrination continues."
Posted by BJ Jackson Lincoln at 1:53 PM