It is nice to see it is not just the US that is full of BIG A HOLES. 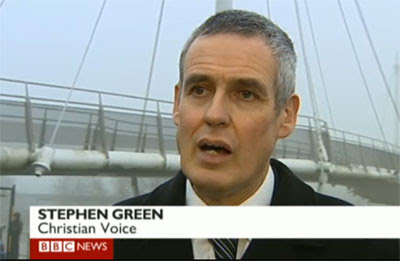 Infamous anti-gay activist Stephen Green, who is well known as a British version of Peter LaBarbera, is being divorced by his wife. Because he's been beating her with a piece of wood.


Caroline Green was often punished by her husband Stephen for failing to be a dutiful, compliant wife, but his final act of violence against her — the one that prompted her long-overdue decision to divorce him — was all the more chilling because it was coldly premeditated. Stephen Green wrote a list of his wife’s ­failings then described the weapon he would make to beat her with. ‘He told me he’d make a piece of wood into a sort of witch’s broom and hit me with it, which he did,’ she recalls, her voice tentative and quiet. ‘He hit me until I bled. I was terrified. I can still remember the pain. ‘Stephen listed my misdemeanours: I was disrespectful and disobedient; I wasn’t loving or submissive enough and I was undermining him. He also said I wasn’t giving him his ­conjugal rights. ‘He even framed our marriage vows — he always put particular emphasis on my promise to obey him — and hung them over our bed. He believed there was no such thing as marital rape and for years I’d been reluctant to have sex with him, but he said it was my duty and was angry if I refused him.

Green's wife also claims that their son had to be hospitalized after a beating from him.

RELATED: Last month the BBC raised the ire of LGBT activists when they interviewed Green as an "opposing voice" in a story about the birth of Elton John's son. Green has publicly endorsed Uganda's plan to execute homosexuals and his group, Christian Voice, has advocated for the overturn of Britain's laws against marital rape, saying that the Bible demands that all women must submit sexually to their husbands. Green has been the subject of numerous praising posts on Peter LaBarbera's site.
Posted by BJ Jackson Lincoln at 10:35 AM