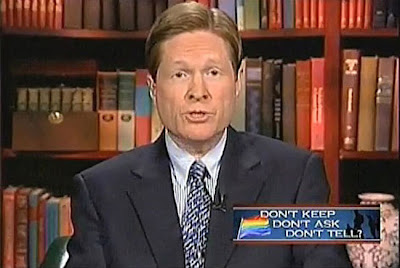 GLAAD has issued a call to action, asking its supporters to write CNN to demand that representatives of hate groups no longer be used to "balance" the network's stories on LGBT rights.

As a recent example, GLAAD cites the appearance of the Family Research Council's Peter Sprigg, who was invited to counter the opinion of DADT repeal activist Alex Nicholson. Among Sprigg's many detestable remarks is his call for all homosexuals to be deported from the United States.


Nicholson's qualifications were clear. As an openly gay, former Army intelligence officer, he gave firsthand accounts of how the policy played out in the day-to-day lives of gay and lesbian service members.Sprigg's qualifications, however, came exclusively from his job at the Family Research Council. There, Sprigg has worked to advance some of the most hurtful, dangerous, and demonstrably false notions about the lives of LGBT people that our country has seen in recent years. And yet, by pairing him with Nicholson in this segment, CNN told its millions of viewers that both of these men should be seen as equally valuable to this discussion.

Is it important for the media to take these groups on? Of course it is. But that's not what CNN and other media organizations are doing when it invites these groups to take part in otherwise reasonable discussions. The media is elevating their hurtful messages and attitudes to the level of rational discourse. The media is saying that people like Alexander Nicholson, who can speak to real-life experience and firsthand facts, need to be "balanced" by people like Peter Sprigg, whose claim to fame is arguing that being gay should be outlawed. If CNN wants to interview a gay person who believes being straight should be outlawed, THEN Peter Sprigg would be an acceptable "balance."

CNN and the rest of the media are doing nothing but exposing their viewers to dangerous anti-gay rhetoric when they invite members of these anti-gay groups onto their programming. Starting in 2011, this needs to stop.