This is an OUTRAGE!!!

What is going on in Ohio!? They just got a new Gov. and he let the anti-discrimination law expire. When he did get around to it, he left out gender identity. That means that if you are transgender or just don't dress the part, you can be fired, kicked out of restaurants, housing,..... The new guy also appointed an all white cabinet and has decided the state will celebrate MLK day in March 17th instead of Jan. 17th...May be a typo.....
Now this guy wants to cut federal funds for the arts!
If I go home to visit my family and friends I have no protections ( my gender identity) and my LEGAL marriage is worthless. On top of that all my friends are artists and they have a hard time making a living without having all federal funds stopped.
How can the state tell their children that being the T in LGBT is open season, they can not marry the person they love, and there will not be any art. John Boehner, the new speaker of the house, is from Ohio and is half the reason for the art censorship at the Smithsonian.

"They are forecasting that this erasure of cultural funding would reduce federal spending by $2.5 trillion over the next decade."

YOU CAN"T ERASE ART! We are not just talking about a painting. This will impact music, theatre, dance, and all outreach programs that bring the arts to our kids.  The people of Ohio should be ashamed that they voted for a bunch of backwards, uncultured, discriminating representatives.

I am so glad I don't live there anymore. 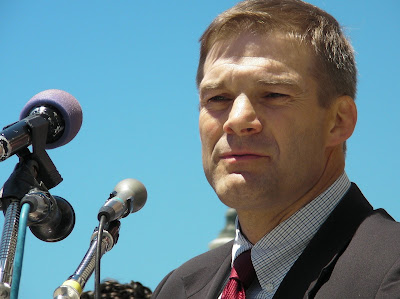 A coalition of Tea Party-backed Congress members headed by wingnut Rep. Jim Jordan (R-OH) plans to cut 100% of all federal funding for the arts.


A group of conservative Republicans, called the Republican Study Committee, revealed a new plan on Thursday to cut federal funding for arts down to zero. This means the National Endowment for the Arts and the National Endowment for the Humanities would be left in the cold. Not to mention the potential hit at the Corporation for Public Broadcasting. Run by Rep. Jim Jordan (R-Ohio), the over 150-person group's plan, the Spending Reduction Act of 2011, would "save" $167.5 million pulled from the NEA and the Humanities endowment and $445 from the Corporation for Public Broadcasting. They are forecasting that this erasure of cultural funding would reduce federal spending by $2.5 trillion over the next decade.