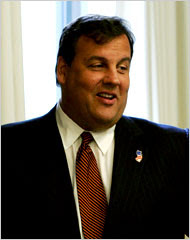 He waited until the very last minute, but New Jersey Gov. Chris Christie this morning signed what is being hailed as the nation's most comprehensive anti-bullying legislation. Garden State Equality exults:

New Jersey Governor Chris Christie today signed the Anti-Bullying Bill of Rights, which enacts a new paradigm in America to counter school bullying and provides a template for anti-bullying laws in other U.S. states. The bill passed both houses of the New Jersey legislature on November 22, 2010 – by 73 to 1 in the Assembly and 30 to 0 in the Senate. Though New Jersey and 44 other states have had anti-bullying laws, experts say those laws have been based on a vague, loophole-riddled model that gives vast discretion to local school districts to do whatever they want or don’t want, and have lacked teeth to work in the real world. The Anti-Bullying Bill of Rights corrects that problem with a sweeping overhaul of New Jersey's current anti-bullying law, enacted in 2002.

“We are grateful to the prime sponsors, Assemblywomen Valerie Vainieri Huttle and Mary Pat Angelini, and Senators Barbara Buono, Diane Allen and Loretta Weinberg, for their leadership that brought Democrats and Republicans together rapidly,” said Steven Goldstein, chair of Garden State Equality. The overwhelmingly bipartisan support for this landmark legislation will give impetus to other states across America, whether they are blue or red, to adopt anti-bullying laws just like ours. The era of vagueness and loopholes in anti-bullying laws is over, and hope for our children has begun.”

The complete text of the law is here.
Posted by BJ Jackson Lincoln at 8:11 AM