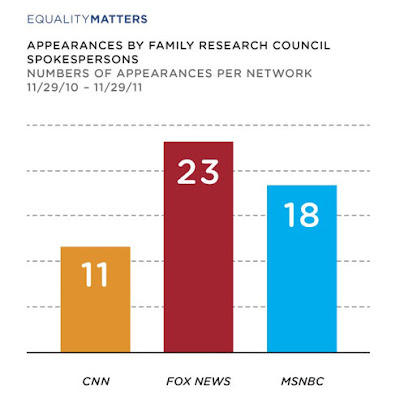 Found at joemygod.com
Equality Matters asks the question we've been asking here for the last year.


In November 2010, the Family Research Council (FRC) was added to the Southern Poverty Law Center’s (SPLC) list of anti-gay hate groups due to its “propagation of known falsehoods” about gays and lesbians. According to an Equality Matters analysis, FRC spokespersons – including Tony Perkins, Peter Sprigg, and Ken Blackwell – have been invited to appear on CNN, MSNBC, and Fox News a total of 54 times in the twelve months since Perkins first appeared on MSNBC to discuss being labeled as a hate group. 24 of those appearances were on Fox News, 19 were on MSNBC, and 11 were on CNN:

FRC head Tony Perkins alone constituted 32 of the above appearances. Check out the below Equality Matters recap of just a few of the many, many vicious anti-gay lies spewed by Tony Perkins. 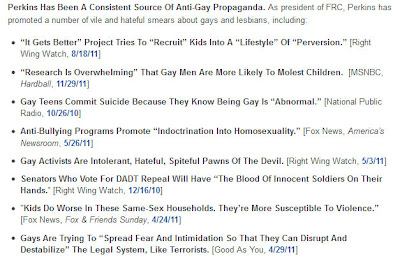 RELATED: I'd also like to know why every single network ignores the scandal that sank Perkins' political career, namely his exposure as having paid KKK Grand Wizard David Duke a whopping $82,500 for access to his mailing list of racists. There's also this: "On May 17th, 2001, Perkins gave a speech to the Louisiana chapter of the Council of Conservative Citizens (CCC), a white supremacist group that has described black people as a 'retrograde species of humanity.'"

Please pass this information on. You don't invite the KKK as authorities on African American issues.
Why would you invite an anti-gay Hate Group to "balance" a discussion on gay rights?
This guy is full if shit and so are a host of orgs. that spread lies and twist the truth to demonize the LGBT population.