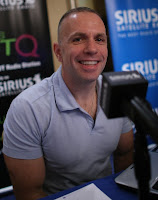 "This week Rick Perry told a 14-year-old openly bisexual girl who questioned him after a town hall in Decorah, Iowa, that he doesn't believe gays should serve openly in the military because 'homosexuality is a sin.' I sure hope young Rebecca Green saw the iconic image days later of two female Navy petty officers, Marissa Gaeta and Citlalic Snell, sharing the first same-sex kiss at ship's return. Because that sweet and wonderful photo is the future. And Rick Perry is the ugly and wretched past that we can hopefully move on from after this hideous GOP primary campaign." - Michelangelo Signorile, writing for Huffington Post.

Read the full article.
Posted by BJ Jackson Lincoln at 6:26 AM