Perry's response to part of the UN speech by Sec. Clinton. I DO NOT want this man as president. He supports discrimination of LGBT people. This is my country too and our current leaders want equal human rights for everyone, not just some and not based on what holy book you read and choose to believe.
Found at joemygod.com 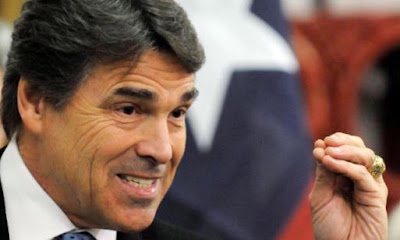 "Just when you thought Barack Obama couldn’t get any more out of touch with America’s values, AP reports his administration wants to make foreign aid decisions based on gay rights. This administration’s war on traditional American values must stop. I have proposed a foreign aid budget that starts at zero. From that zero baseline, we will consider aid requests based solely on America’s national security interests. Promoting special rights for gays in foreign countries is not in America’s interests and not worth a dime of taxpayers’ money.

"But there is a troubling trend here beyond the national security nonsense inherent in this silly idea. This is just the most recent example of an administration at war with people of faith in this country. Investing tax dollars promoting a lifestyle many Americas of faith find so deeply objectionable is wrong. President Obama has again mistaken America’s tolerance for different lifestyles with an endorsement of those lifestyles. I will not make that mistake." - Rick Perry.
Posted by BJ Jackson Lincoln at 6:25 AM