Found at joemygod.com.
I hope Derence does not lose everything they had together. Because they were not married and the federal governemnt does not see them married anyway, Derence is a legal stranger and will have to pay the full taxes on everything and will not get the Social Security he would have gotten otherwise.
My heart goes out to him. 40 years is a life time to be with someone no matter who it is and the state and federal governemnt should recognize that. 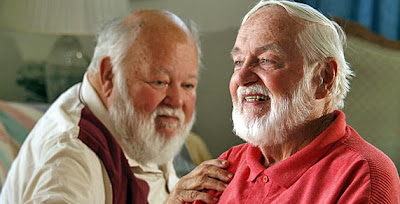 Ed Watson, above left, has died at the age of 78. Watson made national news this year when he expressed his hope that he would be allowed to marry before Alzheimer's Disease robbed him of the ability to recognize Derence, his partner of 40 years.

Gay rights activists lamented Watson's death as a reminder of the harm inflicted on same-sex couples throughout the state because they are denied the right to marry. "It's ironic that he died on the eve of appeals about peripheral issues around a case that should have been settled more than a year ago," said Richard Jacobs, chairman and founder of the gay rights advocacy group Courage Campaign, as he was en route to San Francisco for a hearing before the 9th U.S. Circuit Court of Appeals. "None of this will matter to Ed or Derence."

Here's the clip the couple made in March.