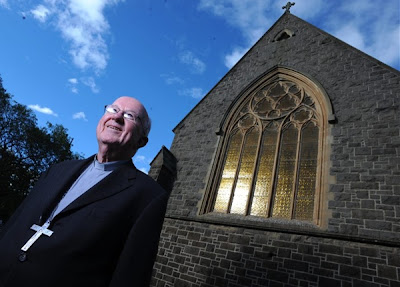 Even though 26 suicides have been attributed to the actions of pedophile priests such as Father Robert Best (above), local Catholic officials in Australia say that no inquiry is needed into the deaths. All of the suicides occurred at schools where Best taught. He has pleaded guilty to dozens of counts of child molestation.


Bishop Connors on Tuesday said not even revelations from Detective Sergeant Kevin Carson that 26 young men had killed themselves after being abused by priests and brothers in Ballarat convinced him that more would be learnt from an inquiry. "I think we've learnt a lot of things about what is appropriate behaviour and what's not appropriate behaviour," Bishop Connors said. "I think people are very well informed nowadays as to what's inappropriate approaches from a male." While conceding the abuse of children was wrong, he said that in the past it had not always been clear to everyone what was appropriate and inappropriate behaviour. "In the past a lot of ignorance was there on the part of lots of people. Parents didn't understand, sometimes bishops didn't understand. We have no excuse now."

"it had not always been clear to everyone what was appropriate and inappropriate behaviour." "Catholic officials in Australia say that no inquiry is needed "
Are you F**KING KIDDING ME!

An inquiry IS NEEDED to find out what went on and help any other poor souls that are suffering. It IS needed to jail the ones that did this.

What part of "Keep your hands off the private parts of children" do they not understand?!
What a load of shit and disrespect to those who have lost loved ones and those who suffered.

Every day there are Catholic priests being busted for past and present sex abuse of children and they just keep getting away with it. The church knows this is going on and helps to hide these sick men as well as pay off those who suffered at their hands.
Our government supports this ring of child molesters by giving them tax exempt status.
If this was any other business, they would be shut down!

Posted by BJ Jackson Lincoln at 7:41 AM