If any other business had this much child abuse going on they would be raided, shut down, and every one involved or had knowledge of the goings on, would be arrested and jailed.
The Catholic church not only is grossly behind the times but harbors and protects perverts.
They are so anti-gay that they are shutting down adoption centers and food banks everywhere there are anti- discrimination laws. They are NOT thinking about the kids and adults they serve. They are only thinking about the money. Money that goes to hide child molesters and pay off the people they abused.

Why are these child molesters above the law? How many other kids has this sick old man molested behind his robes? How many of these perverts are sitting in jail?

When a member of any other religion is caught or accused at least the other members leave and their ministries fail. The Catholic church just keeps on going.

I can not understand how a person could call themselves a catholic when they don't follow most of the made up "rules" such as no condoms, no pre marital sex, hate gays, and so on. Then to give any money to them to pay off the mounting law suites because of the molesters they protect. That is a SIN ! 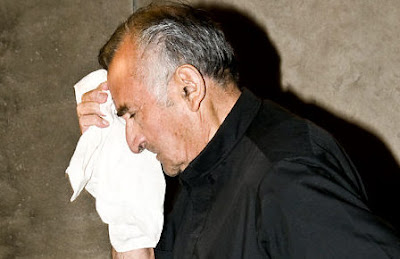 Father Jaime Duenas was busted inside his own rectory yesterday and charged with molesting a teenage girl.

“She didn’t protest to getting a massage,” Duenas said in his cell before his arraignment last night, according to prosecutors. “She was wearing short skirts.” Duenas was arraigned last night on charges of sexual abuse, forcible touching and endangering the welfare of a child. He was released without bond. The judge ordered the priest to stay away from the victim.