From joemygod.com comes this great news... 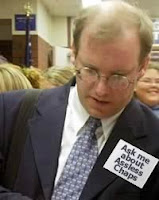 
According to the IRS, the tax-exempt status of Americans for Truth About Homosexuality (AFTAH) was revoked on 5/10/2010 (PDF). The reason for this action is listed by the reporting organization Guidestar as a “failure to file a Form 990, 990-EZ, 990-N, or 990-PF for 3 consecutive years.” These forms are required of legitimate non-profit organizations for review by the IRS and the public. While the current incarnation of AFTAH appears to have been active since 2006, we found only one form 990-EZ on file — for the year 2009 (PDF). In this, total receipts are listed as $110.000, out of which Peter LaBarbera received a salary of $75,000. For perspective, this is approximately the same salary plus benefits claimed by Exodus president Alan Chambers. Exodus lists eleven employees and a million dollar budget.

Ex-Gay Watch notes that AFTAH's website no longer mentions a tax-exempt status. They add: "Thousands of organizations exist which claim that homosexuality is a sin or otherwise immoral, only eighteen are listed as true hate groups by the SPLC. AFTAH is one of them."
Every Hate Group should have it's tax exemptions taken away. Our government should not be supporting Hate Groups.
Posted by BJ Jackson Lincoln at 7:34 AM