From the Teabaggers to joemygod.com to you... 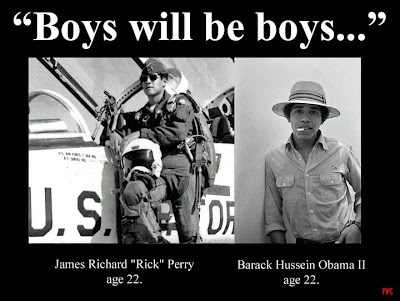 The above image is being gleefully posted on wingnut forums such as Free Republic and Rush Limbaugh's equally fascist brother is tweeting it to all his followers. Nobody is mentioning that Obama's photo was taken while he was a senior majoring in political science at Columbia University. That's the Ivy League, teabaggers. And despite what the photo suggests, at age 22 Rick Perry was not some glory-drenched fighter pilot strafing Vietnamese civilians with napalm. He was a male cheerleader at Texas A&M. Ahem.
Posted by BJ Jackson Lincoln at 10:16 AM