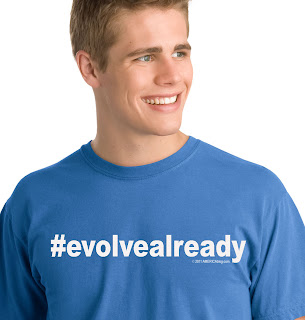 In honor of our marriage equality victory in New York, and our ongoing fight for equality nationwide, Joe and I have partnered with the "Don't Panic!" t-shirt company to offer you AMERICAblog's very own marriage equality t-shirt collection - all shirts are only $19.99, and they're top quality.

Don't Panic! has agreed to donate a large portion of the proceeds of the sale of each shirt to AMERICAblog. Each shirt we sell, in a very real way, will help us finance the continuing operation of the AMERICAblog family of sites (as you may know, running the blog is my full-time job, and it's nearly a full-time job for Joe as well).


Don't Panic!, you might recall, did all those great t-shirts like "2QT2BSTR8" and "Nobody knows I'm a lesbian" and "I'm not gay but my boyfriend is." They also have a reputation for selling really good quality shirts, not some cheap imitation that becomes misshapen when you wash it. And they're socially conscious as well. In addition to them helping us spread the word about marriage, and help finance the blog, Don't Panic! has helped AFER, helped us work against the constitutional amendment on marriage back in 2004 with Don'tAmend.com, and helped us all the way back in 2000 on StopDrLaura.com, when Don't Panic!'s t-shirts were the ONLY way we were raising money to get Dr. Laura Schlessinger's TV show canceled (and we did). 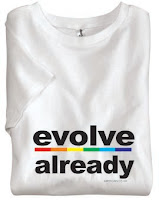 We've decided to go with the "evolution" theme since, as you know, Joe Sudbay asked the President about marriage equality last October and got the now famous reply, "attitudes evolve, including mine." As Joe wrote earlier this week, it's time for the President to "evolve already." AP and the Washington Post have both now picked up on the "evolve already" meme, and it's all over Twitter. You can help us spread that message with an AMERICAblog marriage equality t-shirt.
Every image we've published in this post is a t-shirt we're now selling via Don't Panic!'s AMERICAblog shop. And as I said, they're only $19.99 each, high quality, and a large portion of the proceeds of each sale goes to AMERICAblog. So you're helping us spread the word, and support the blog, with the purchase of each shirt. And what better way to celebrate our wonderful victory in New York, and to urge the President to "evolve already" - buy an AMERICAblog marriage equality t-shirt today.


The company launched in 1990 with the “Nobody Knows I’m Gay” t-shirt sold from a booth at the annual Los Angeles Gay and Lesbian Festival. In three months, Hynes had sold more than $30,000 worth of shirts. After a triumph at the 1990 Gay Games in Vancouver, BC (more than 4,000 shirts sold almost immediately) Hynes left his day job as a music studio coordinator to sell his shirts full time.

Hynes’ string of hits continued with messages like “Closets Are for Clothes”, “2QT2BSTR8”, and “I Can’t Even Think Straight”. In February 1993, the company’s fame grew with “LEAVE CHELSEA ALONE” in support of Chelsea Clinton. From Time Magazine to Good Morning America to USA Today to Britain’s The Word TV show, the shirt won acclaim (not to mention a thank you note from then President Clinton) as one of the years hottest. With innovative “firsts” like the “Bad Hair Day” hat, Freedom Lights, the worlds first queer Christmas tree lights; OUTch! the first ever gay watch collection, and the first gay tumbler set, Don’t Panic! keeps winning new fans.

To give back to the communities that support it, Don’t Panic! established “Miracles Happen”, an acclaimed merchandising program, in 1992. Through sales of a striking red ribbon enclosed in a glass ornament (happily promoted in ads by Cher), caps, and T-shirts, “Miracles Happen” raised more than $80,000 for the American Federation for AIDS Research (AmFAR). More recently, in 2000, Don’t Panic! Worked with John Aravosis of StopDrLaura.com to raise money and awareness that ultimately let to the cancellation of Dr. Laura Schlessinger's TV show. In 2004 Skyler worked with Robin Tyler and John Aravosis of the DontAmend.com to help stop the movement to amend the constitution to make marriage between same sex couples illegal. (Don't Panic! founder Skyler Hynes and his partner Martin Finkelstein were married in Montreal and have 9 years old twins.)

Posted by BJ Jackson Lincoln at 2:48 AM