By now you know that New York has gay marriage and they will begin getting hitched July 24th. The turn out for NYC Pride was awesome as they have alot to celebrate. 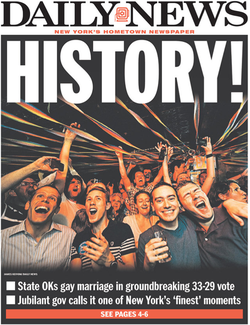 Baltimore Pride was last weekend and my wife and I as well as the Community College of Baltimore County Rainbow Club marched.  The parade went well with the usual festive mood and fun. There was  a group of protesters that jumped in the parade carrying signs against the corporate sponsorship of pride. Not many seemed to either notice or care. The heat did get to Tami by the end of the day. Bringing the car around to the other end of the parade to pick her up was almost as fun as the parade. I think next year we will just join the crowds on the sidelines.
Chicago Pride had a bad set back when the garage that stored over 30 floats was broken into some time in the middle of the night and 2 tires on each of 30 floats were slashed. Nothing else was damaged or stolen. Smells like a hate crime to me...

The worst thing to happen so far as June and pride are winding down is an accident in Alaska. The car carrying the Grand Marchle Ran over and killed a man marching in the parade. All was canceled immediately.

Over all I would have to say that this years Pride Month when well but remember that Pride is not just once a year. Pride is how we live our lives everyday.
Posted by BJ Jackson Lincoln at 3:28 AM