The Anti-Gay Not-Scouts _ Shame on Them 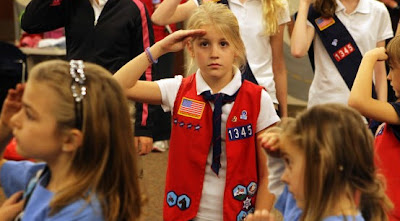 Because of the recent furor over the Girl Scouts' inclusive membership policy, an anti-gay alternative called the American Heritage Girls is seeing an explosion in membership.


The group started with 100 girls in Ohio, and in recent weeks has surpassed 18,000 members in 45 states and six countries. Nine groups with a total of 357 girls meet in the St. Louis area; there were five local groups at this time last year. They are based at private schools and churches in Jefferson, St. Charles and St. Louis counties. Founder Patti Garibay, who had been a longtime Girl Scout leader for her daughters, wanted a choice. "We are faith-based, and they are secular, and that's a change," she said. "We're not for everybody, but we're obviously for a lot of people." Garibay estimates that 90 percent of Heritage members have left the Girl Scouts. Shanna Stewart, who home-schools her two daughters in Wentzville, found American Heritage Girls after becoming concerned when she learned the Girl Scouts had invited a lesbian to speak at the national level. "They were encouraging girls to embrace whoever they were; it didn't matter what choices they made, as long as they were true to themselves. That was a concern."

Like the Boy Scouts, the American Heritage Girls ban atheists and gays from becoming members or leaders.

Having been both a Girl Scout and a Boy Scout leader as well as born and raised in Ohio, I have had my share of conflicting emotions.

I loved being a Girl Scout. It was also when I became aware I was different from my friends. It is very nice to know that the Girl Scouts will accept all girls, LGB and T.

I loved being a Boy Scout leader. Knowing my son would benefit from scouting and could give him a foot in the door as an Eagle Scout was reason enough to hide my orientation. It just so happened that the troop leader was a lesbian too so we paired up and had a great time. We won awards for more food collected 3 years in a row. We expanded our meetings to 1.5 hours because we were having so much fun and 3 of our boys went on to become Eagle Scouts, my son did not. That's OK.

When our boys went up to the next level of scouting, I dropped out. It was about the same time it became public that the Boy Scouts did not want LGBT kids or leaders. I was sad and angry that the government supports that BS.

Since when does "...encouraging girls to embrace whoever they were; it didn't matter what choices they made, as long as they were true to themselves." become a bad thing?

It is a shame that some kids can't be scouts because of who they are. It is shameful that some kids are being taught that being LGBT or not being Christian is so bad that they can't join.

Posted by BJ Jackson Lincoln at 7:25 AM