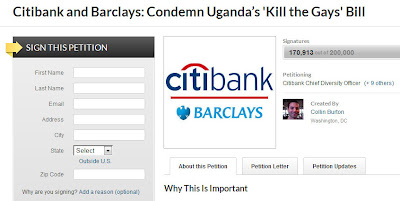 
With the “Kill the Gays” bill looming in Uganda’s parliament, Citibank and Barclays have unique and necessary voices that could help stop this bill in its tracks. Their presence in Uganda is significant, and their voices in opposition to the Anti-Homosexuality Bill could have a profound impact in keeping LGBT people safe in Uganda. Ask Citibank and Barclays to publicly condemn Uganda’s “Kill the Gays” bill, and send a loud message to Ugandan legislators that criminalizing homosexuality with lifetime prison sentences and the death penalty won’t be supported by major international businesses.


For a ton of info on the "Kill the Gays" bill click here.


People! We are all connected and the World has to speak up about this. People have already been killed and raped because of the fear and lies.
Lies,  junk science, and religious zealotry that came from American Hate Groups.
These Hatemongers are losing the "culture war" THEY started here so they spewed their vomit on a less informed and under educated country to create such fear and hatred of LGBT people that they want to pass the bill to kill them!
LGBT people live it fear for their lives. If they don't get killed in the streets first, they could spend their life in prison or die. Plus, if a person knows of or harbors a gay person, they could go to jail for not reporting them.
Sign the petition and pass the word.
No one should have to live this way and we must speak up!

Posted by BJ Jackson Lincoln at 7:02 AM