This was posted at joemygod.com
I wish we had some kind of laws like this. 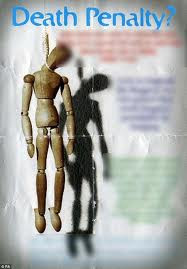 Three Muslim men have been sentenced to prison for handing out "death to gays" pamphlets in the British town of Derby. Last month the men were found guilty of inciting hatred under the recently revised Public Order Act, which now forbids such anti-gay actions.


Ihjaz Ali, Kabir Ahmed and Razwan Javed were found guilty of stirring up hatred on the grounds of sexual orientation at Derby Crown Court last month. The leaflet, titled Death Penalty?, was distributed in the build-up to a gay pride event in July 2010. Ali was jailed for two years while Ahmed and Javed were given 15 month sentences. It is the first prosecution of its kind since new laws came into force in 2010. Ali, 42, of Fairfax Road, Ahmed, 28, of Madeley Street, and Javed, 27, of Wilfred Street, had claimed they were simply doing their duty as Muslims to condemn sinful behaviour in society. Two other men, Mehboob Hussain and Umar Javed, who were also charged with the same offence, were found not guilty. Judge John Burgess said: "You have been convicted of intending to stir up hatred. "It follows that your intention was to do great harm in a peaceful community."

Lawyers for the men objected to their prosecution on the grounds of freedom of speech, pointing out that the pamphlets merely quoted well-known passages from the Koran. However the judge noted that the materials also stated that "capital punishment" was the only cure for homosexuality.
Posted by BJ Jackson Lincoln at 9:53 AM